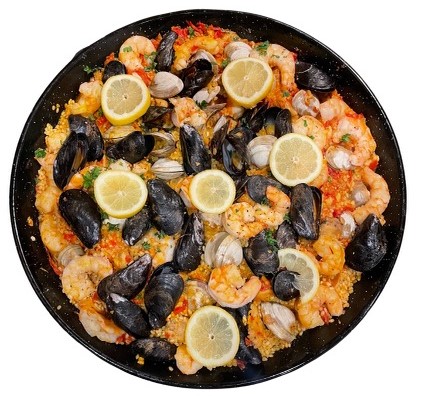 So let me start by saying this is not an original recipe! I have always wanted to make authentic Spanish Paella but was hesitant because it seemed so labor intensive and honestly I was scared. But what I found was there is no reason to be scared! What I did find is that I ended up with rice that was cooked in a saffron infused, flavor loaded sauce with all your seafood cooked to perfection.

I found when making this Paella it was not as difficult as I thought it would be. Don’t get me wrong, there was a ton of trial and error on my part. I don’t call myself a Paella expert by no means, but I am pleased to share everything I have learned about making Paella, as authentically and practically as possible.

When researching Paella recipes, I really dug in deep to find out the history behind Paella. What I found was that Paella is a rice dish originally from Valencia. While it is commonly viewed by non-Spaniards as Spain’s national dish, Spaniards almost unanimously consider it to be a dish from the Valencian region. Valencians, in turn, regard paella as one of their identifying symbols. Wikipedia

On the other side, some say that Paella (pai·ei·uh) is a classic rice dish originally from the Valencian region of Eastern Spain. A major cultivator of rice since it was introduced to Spain by the Moors in the 10th century, Valencia was one of the largest trading ports in the Mediterranean.

Paella (pai·ei·uh) is a classic rice dish made with rice, saffron, vegetables, chicken, and seafood cooked and served in one pan. The one pan recipes are always a win in my book as it makes cleanup so much easier. I made fresh garlic green beans with this dish which was a perfect side to this wonderful Paella.

The rice is the main ingredient in Paella, Spanish rice (also called “bomba” rice, calaspara rice, arroz redonda) is traditional in Paella. It’s a short grain rice that absorbs more water than regular rice, without turning mushy. You can buy Spanish rice on Amazon, World Market or an international food market. I purchased my rice, saffron and smoked paprika from World Market and I ordered by Paella pan from Amazon.

If you are asking yourself if you need a paella pan for this recipe? No you can use a regular large skillet to make Paella. Traditional paella is cooked in a large paella pan like the pan I purchased from Amazon because it allows the rice to be spread out into a thin layer and cook more evenly.

I decided to make a seafood and chicken Paella. However, if you are not a fan of seafood, leave it out and substitute more chicken and vegetables. You can use any combination of your favorite seafood including clams, mussels, scallops, shrimp, and calamari. I decided on clams, mussels and shrimp. I prefer to use fresh seafood but sometimes that can be hard to find in this neck of North Carolina. If you can’t find fresh seafood, frozen seafood is a great option. Be sure to thaw frozen seafood in the fridge overnight before using.

When buying fresh seafood make sure to smell it to make sure it’s fresh. It should not have a strong fishy odor and should smell just like the ocean (slightly salty).

With regard to the chicken, I like to use boneless skinless chicken thighs in my recipes. Chicken thighs do not dry out the way chicken breasts do and to me hold their flavor better.

The beauty of paella is that it is in fact extremely flexible. Don’t get too hung up about using the exact seafood or chicken that I utilized in this recipe. You can substitute pork, turkey, fish, or chorizo. You can also make a vegetarian paella by omitting the meat and seafood and using extra vegetables like green beans, mushrooms, olives, asparagus or artichokes.

Spanish Paella is nourishing, vibrant and has held a place of honor and practicality in Spanish homes for centuries. To round out the meal, choose a good Spanish red wine, grab a crusty baguette, and serve with a light salad or side of fresh green beans.

Spanish Paella with Seafood and Chicken

You can make a delicious, authentic Paella–the most popular dish of Spain–in your own kitchen with simple ingredients like rice, saffron, vegetables, chicken, and seafood.